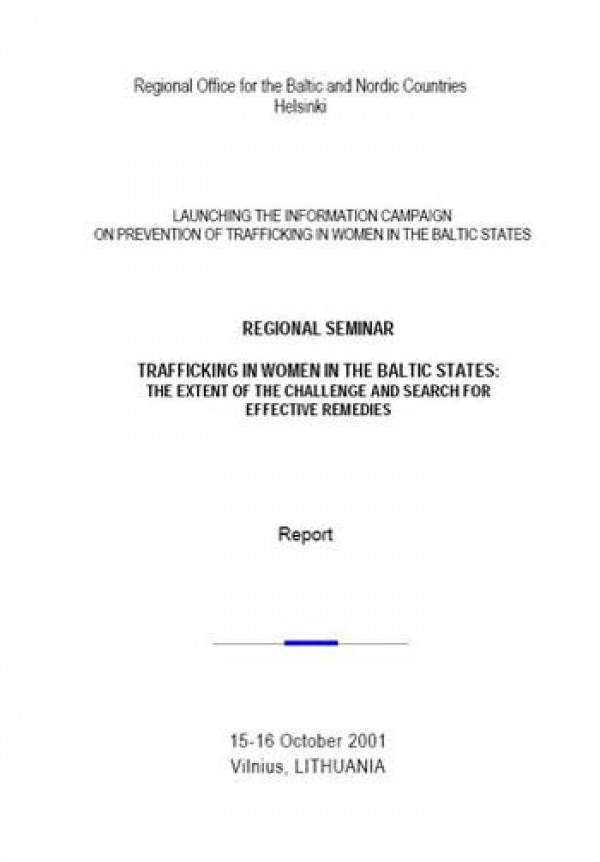 Regional Seminar on Trafficking in Women in the Baltic States: The Extent of the Challenge and Search for Effective Remedies

The Regional Seminar took place in Vilnius, Lithuania on 15-16 October 2001 and was attended by over 115 government officials and NGO representatives from the Baltic States as well as Nordic and other EU countries. The Seminar serves a number of purposes.

Firstly, it was an opportunity to recapitulate the results of the implemented IOM research project and present its findings to the audience which consisted of key actors in combating trafficking in women, both in the Baltic region as well as internationally.

Secondly, discussions and comments at the seminar provided valuable feedback to designing IOM's further measures in combating trafficking in women in the Baltic States, chiefly information campaign and administrative capacity building. In particular, comments provided by the participants to the newly launched IOM information campaign in the Baltic States - including its conceptual framework and the "Human Marionette" visual design - contributed to the effectiveness of the ongoing campaign.

Finally, the seminar proved to be an important event in promoting networking and consolidating working links between key actors active in combating trafficking in women, in particular those from governmental agencies and the NGO sector.

This Report presents summary of proceedings at the Vilnius Regional Seminar and recapitulates the main points that emerged during presentations and discussions. We trust that the attached presentations and other empirical data will serve useful reference to both academics as well as practitioners working in the field of combating trafficking in women.