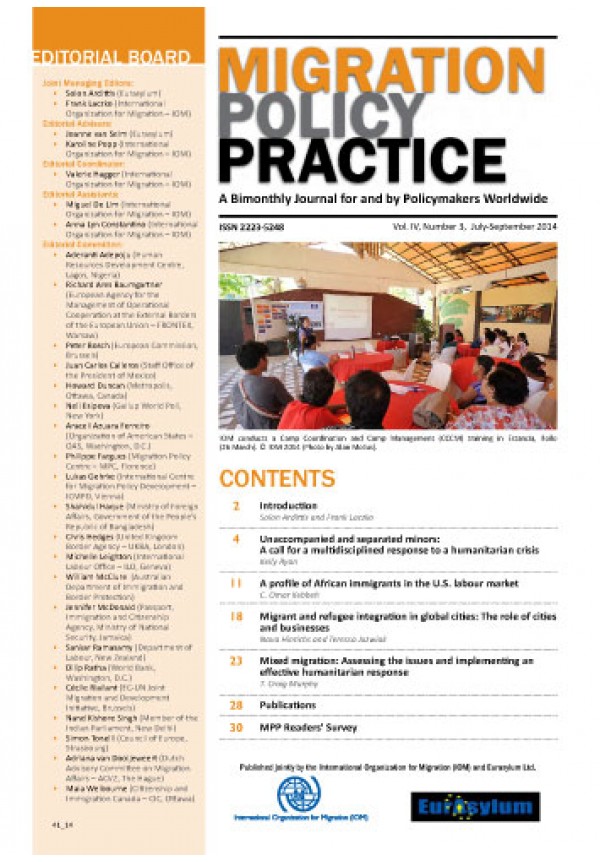 Minors represent an important share of migrants crossing the Mediterranean, with an estimated 14,000 children crossing into Italy in 2014. In North America, the growing number of unaccompanied children leaving Central America and travelling north to Mexico and the United States has become a major policy concern. The U.S. Government has predicted that as many as 70,000 unaccompanied minors will arrive in the United States this year. Kelly Ryan, the Coordinator of the Intergovernmental Consultations on Migration, Asylum and Refugees (IGC, Geneva), addresses this complex policy question in the first article of this issue of MPP. She calls for a new policy framework which should be based on the principle that unaccompanied children should be treated first and foremost as children.

The third article, by Nava Hinrichs and Teressa Juzwiak of The Hague Process on Refugees and Migration, focuses on eight cities around the world and their efforts to promote the integration of migrants and refugees. The article focuses in particular on the role of the private sector, and the innovative ways in which businesses help to promote integration in cities as diverse as Auckland, Buenos Aires, Chicago, Kuala Lumpur, Lisbon, Nairobi, Rotterdam, and Sao Paolo. The article is based on research conducted by the UN University–Maastricht Economic and Social Research Institute on Innovation and Technology (UNU-MERIT).

The final article in this issue again focuses on the subject of irregular migration, and the concept of “mixed migration” in particular. T. Craig Murphy, an IOM official based in Kenya, reports in particular on the trend in migrant deaths in the Red Sea and Gulf of Aden. He shows that contrary to the trend in the Mediterranean, the number of lives lost in the Gulf of Aden and Red Sea decreased from 2008 to 2013.

As the journal approaches its third anniversary the editors would like to invite readers to spare a couple of minutes to participate in a short readers’ satisfaction survey. The purpose of this survey, which can be taken anonymously, is to help us identify our readers’ profiles, the institutions they represent and their primary interests in our journal. The survey’s responses should contribute, in particular, to adjusting and improving, as appropriate, the journal’s contents, style and reader’s experience. Should you wish to participate in this survey, please click here Migration Policy Practice: Readers' Survey.