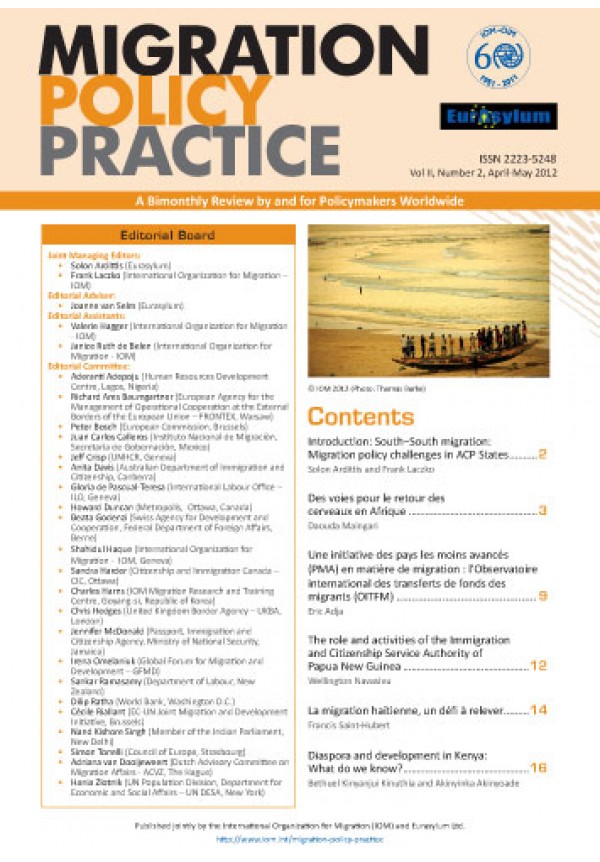 Migration Policy Practice is a bimonthly journal published jointly by the International Organization for Migration (IOM) and Eurasylum Ltd. It only contributes articles from, and is overseen by, senior officials in Government, EU and international organizations, as well as civil society worldwide, working in the field of migration policy.

The focus of this special English−French bilingual edition of Migration Policy Practice is on migration trends and policies in the African, Caribbean and Pacific (ACP) region.  The 79 ACP States have become important countries of origin and destination. At a meeting in Brussels on 31 May 2011, which gathered the ministers of foreign affairs of 27 EU Member States and 79 ACP countries, it was agreed that dialogue on migration should be enhanced, and that both the European Union and the ACP countries should pay special attention to issues such as visa policy, migrants’ bank transfers and returning migrants. A dedicated working group was also established specifically for this purpose, which will report on its work at the Thirty-seventh Session of the Joint ACP−EU Council of Ministers in Vanuatu on 11–15 June 2012.

The special issue of MPP includes five articles written mostly by senior government officials from selected ACP countries. It covers such issues as: the return of highly skilled migrants to Africa (by Daouda Maingari, Cultural Counsellor at the Embassy of Cameroon in Belgium); the activities of the International Observatory on the Transfer of Migrants’ Remittances to Less Developed Countries (by Eric Adja, Adviser to the President of Benin ); the role and activities of the Papua New Guinea Immigration and Citizenship Service (by Wellington Navasivu, Director of the Legal and Policy Branch of the Papua New Guinea Immigration and Citizenship Service); migration trends in Haiti (by Francis Saint-Hubert, Director of Projects at the Ministry of Haitians Living Abroad); and remittances and development in Kenya (by Bethuel Kinyanjui Kinuthia, from the Department of Economics at the University of Nairobi, and Akinyinka Akinyoade, from the African Studies Centre in Leiden).

Should you wish to contribute an article for a future issue of this journal, please contact Solon Ardittis (sardittis@eurasylum.org) and Frank Laczko (flaczko@iom.int).