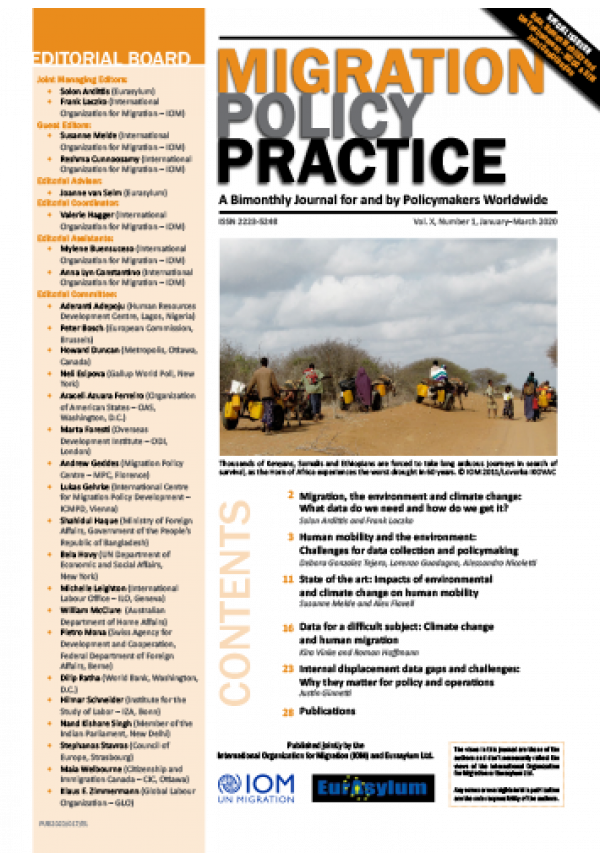 This special issue of Migration Policy Practice focuses on the linkages between migration, the environment and climate change. Although numerous papers and reports have been written about this subject in recent years, it is widely agreed that there is a lack of data on this subject. Estimates suggesting that between 200 million and 1 billion people could be displaced by climate change during the next 30 years have captured the attention of policymakers and the media. Yet, as the authors of this special issue point out, such figures are often based on little more than guesswork.

Regarding the second question, one of the problems is that there is a general paucity of timely, accurate and disaggregated data on all forms of migration. The lack of data on migration has been recognized in the Global Compact for Migration, which calls upon all countries to improve the collection and analysis of data on migration. Currently, only a minority of countries, for example, share data on migration flows with the United Nations Department of Economic and Social Affairs Statistics Division each year.

A number of authors suggest that one way forward could be to take advantage of new technologies and the potential of using big data and other new sources of data. However, it is also recognized that such data often needs to be complemented with information from more traditional data sources such as surveys and administrative data. In the case of the latter, the problem is not always the lack of data but the lack of the sharing of such data between different actors at the national level and the use of different definitions and concepts. All authors agree that there is a need to invest in building the capacities of statistical systems to better capture data on migration, the environment and climate change in the future.