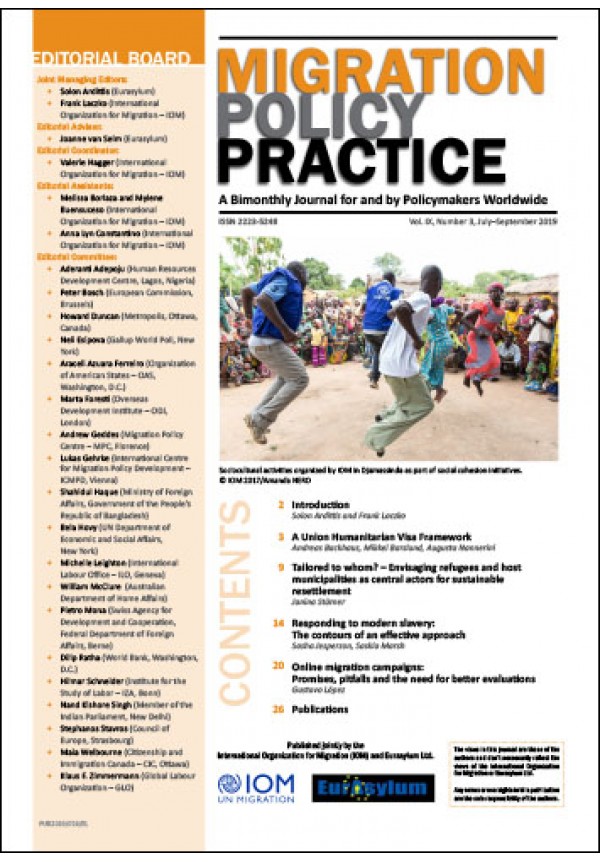 The first article, by Andreas Backhaus, Mikkel Barslund and Augusta Nannerini of the Centre for European Policy Studies, discusses the implications of a resolution by the European Parliament in December 2018 asking the European Commission to present a proposal for a common European Union framework on the provision of humanitarian visas.

The second article, by Janina Stürner of the Friedrich-Alexander-Universität of Erlangen-Nürnberg, discusses the limitations of current resettlement programmes which, apart from private sponsorship initiatives, are normally designed at State level and thus exclude hosting municipalities, which provide local protection in practice, and other major stakeholders.

The third article, by Sasha Jesperson and Saskia Marsh, discusses the findings of an independent evaluation of MSIF, which was recently conducted on behalf of the Home Office. MSIF was launched by the Government of the United Kingdom in October 2016 to support innovative projects tackling modern slavery around the world.

The final article, by Gustavo López of the International Organization for Migration’s (IOM) Global Migration Data Analysis Centre (GMDAC), discusses the weaknesses of existing impact evaluations of online migration campaigns, particularly those aiming to raise awareness about the risks of irregular migration. The article shows that there are many key structural challenges that make traditional impact evaluations over the Internet difficult to conduct.