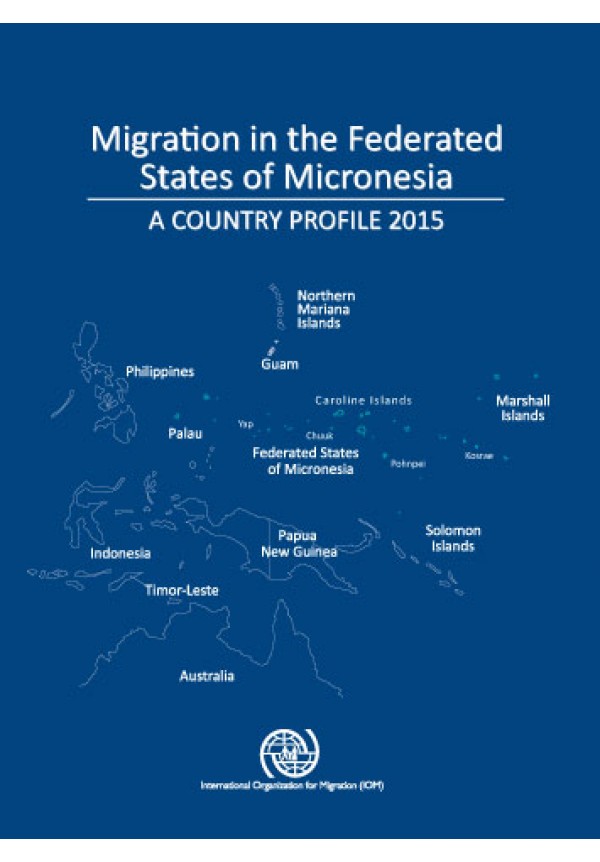 Migration in the Federated States of Micronesia: A Country Profile 2015

Micronesians have been migrating for more than a millennium. The first Micronesians moved into the islands by canoe, some from the East and some from the West. They settled throughout the 100 or so inhabited islands in what became the Federated States of Micronesia, subsisting on small-scale agriculture and food from the ocean. They developed about 10 languages and many dialects over time. The population increased throughout the 1900s to about 107,000 in 2000, doubling since 1980; after that, it has been decreasing.

The land area of the Federated States of Micronesia is remarkably small compared to vast ocean surrounding. The density is about 150 per km2. The total fertility rate increased from about 6 in 1950 to 8 in the early 1970s, before decreasing to about 3.5 in 2010. The life expectancy at birth is about 69 years. Migration is becoming a continuous flow because of lack of economy in the Federated States of Micronesia and free entry into the United States.

Micronesia does not experience immigration. Instead, it gets foreign workers – generally about 3,000 of them at any particular time – who come for varying periods of time and then leave, to be replaced by others. The foreign workers are more educated and have better skills than the indigenous population. About 20 per cent of those born in the Federated States of Micronesia were in the paid labour force in 2010 compared to about 60 per cent of the foreign workers. They tend be highly skilled, but are mostly in the small private sector.

While internal migration and immigration are minimal, emigration is not. Until the 1970s, very few Micronesians left the country at all. However, in the late 1970s, basic education grants became available, so a first wave of migrants went for schooling. Most came back. Almost all emigration was – and continues to be – to the United States and its insular areas of Guam and the Commonwealth of the Mariana Islands.

The Compact of Free Association was implemented in the late 1980s, and with it, free entry into the United States and its territories. The first wave of migration was primarily to Guam, but later migrations continued on to Hawaii and the United States Mainland. A series of surveys shows the growing numbers of emigrants in the receiving areas. About 1,000 born in the Federated States of Micronesia were outside the country in 1980, and a flow started about then. However, the immigration continued and became rapid a few years after the implementation of the Compact, to about 50,000 in 2012. The population pyramid of the migrants shows the beginning of a second generation, with the first migrants now having or bringing children, compared to a continuing traditional pyramid among those remaining. Fertility of emigrants is about 1.5, as many of the women join the labour force and put off having children, or having fewer. However, most of the migrants tend to continue speaking their native languages at home and about two out of every three remain citizens of the Federated States of Micronesia. A Micronesian-ness index created based on the 2012 survey showed that the farther away physically from Micronesia, the more attachment to traditions.  Hence, those farthest away may be the most likely to be enticed back if economic development takes place. Half the emigrant adults are in the labour force, and almost all are in the private sector. But like many immigrants, their hourly wage is low, at about USD 10 an hour, and the average worker makes about USD 17,000 a year. Unlike many other migrants, Micronesians tend not to remit; because of the unique relationship with the United States, they tend to save funds to bring out the next generation of migrants. It is clear from the data that the Federated States of Micronesia is experiencing a severe brain drain.  In fact, from the point of view of potential economic development, even more than the brain drain is simply the numbers of young men and women leaving and not coming back.

The main reason so many Micronesians are emigrating is the almost complete lack of economic development within the Federated States of Micronesia. As long as the economic climate remains dismal, migration becomes the safety valve for Micronesians wanting more than a subsistence lifestyle. The government has not been able to provide jobs, adequate health facilities, as well as secondary and tertiary education needed to attract investment and keep young graduates on the islands. Already about one in every three born in the Federated States of Micronesia (and first-generation descendants) are outside the islands. The emigration is most likely going to continue apace.