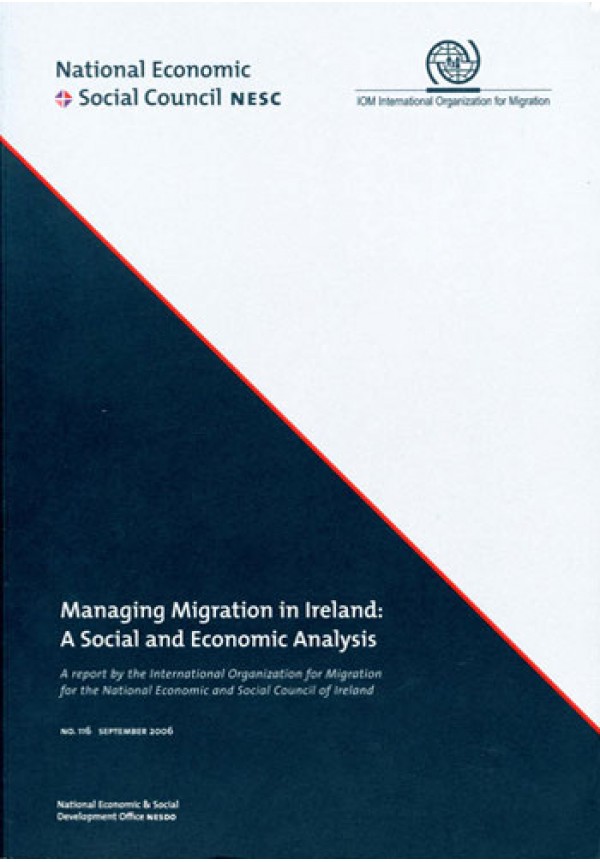 Managing Migration in Ireland: A Social and Economic Analysis

The report, “Managing Migration in Ireland: A Social and Economic Analysis”, prepared by IOM on behalf of Ireland’s National Economic and Social Council (NESC) shows that while immigration has largely had a positive effect on the Irish economy, the country needs to have a long-term immigration strategy including better provisions for the integration of migrants into society if Ireland is to continue benefiting from migration.

With a rapidly growing economy and a high demand for migrant labour, Ireland’s migration policies were virtually employer led until a few years ago. With migration likely to remain a structural feature of the Irish economy, the report recommends that the government lead the way in building a widely shared understanding of the role of migration in the long-term economic and social future of the country and that migration should be factored into the spectrum of government with integration policies being mainstreamed into key service delivery departments such as health and education.

Migration to Ireland has also benefited countries of origin. According to the report, migrants have sent home more than 100 million Euros through formal channels to countries outside of Europe and North America over the past two years. With migrants coming from more than 100 countries, cultural diversity and knowledge of different business practices could also help boost Ireland’s trade with other countries, and encourage investment into the country.