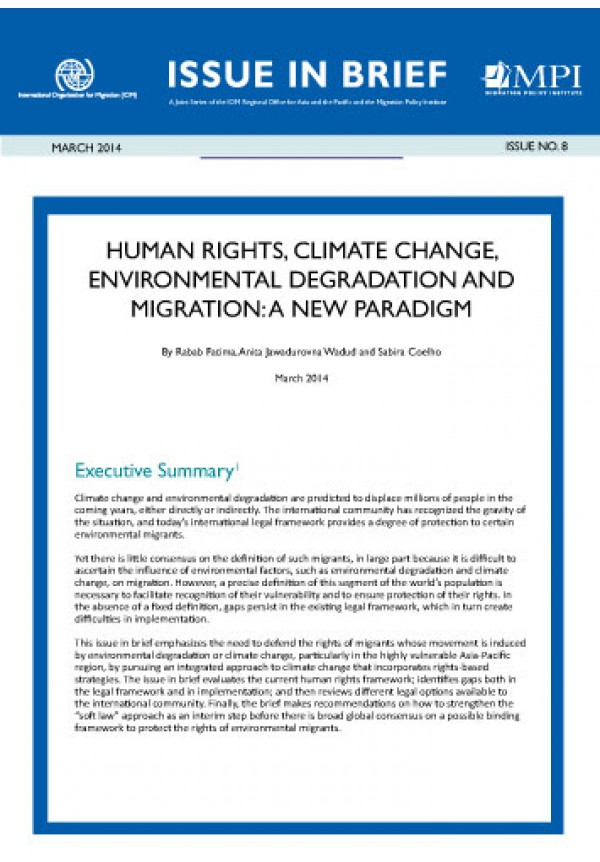 Climate change and environmental degradation are predicted to displace millions of people in the coming years, either directly or indirectly. This will lead to situations wherein the human rights of such populations could be threatened.

In Human Rights, Climate Change, Environmental Degradation: A New Paradigm, authors Rabab Fatima, Anita J. Wadud and Sabira Coelho evaluate whether the current human rights framework can provide protection to these vulnerable people who are displaced or who migrate as a consequence of environmental degradation and climate change. The issue in brief looks at the different legal options available to the international community while identifying gaps both in the existing legal framework and in implementation.

The authors emphasize the need to defend the rights of migrants whose movement is induced by environmental degradation or climate change, particularly in the highly vulnerable Asia-Pacific region. To do so, the authors argue that governments should pursue an integrated approach to climate change, which incorporates rights-based strategies. A soft law framework could be a good first step in this direction.

This issue in brief is the eighth in the series of policy papers by the Migration Policy Institute (MPI) and the International Organization for Migration’s Regional Office for Asia and the Pacific, offering succinct insights into migration issues affecting the Asia-Pacific region today. To read earlier briefs in the series launched in 2012, IOM Online Bookstore or Migration Policy Institute.