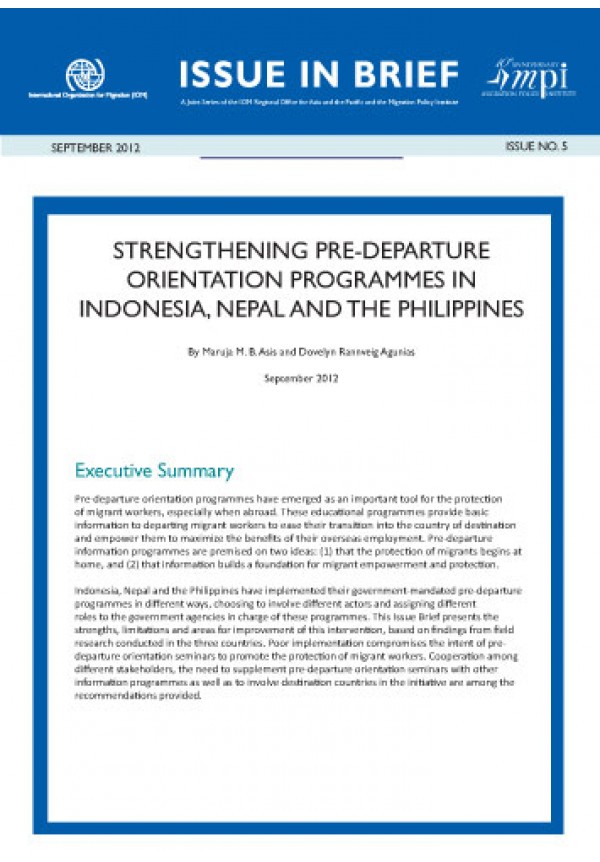 IOM-MPI Issue in Brief No. 5 - Strengthening Pre-Departure Orientation Programmes in Indonesia, Nepal and the Philippines

The state plays a strong role in overseas employment programmes in the Philippines, Indonesia and Nepal, which are leading labour exporters — with more than 2 million of their workers deploying on formal temporary contracts in 2009 alone.

With overseas employment a more permanent feature of the employment and development strategies of these and other Asian states, pre-departure orientation programmes have emerged as an important tool for the protection of migrant workers, especially when abroad.

In Strengthening Pre-Departure Orientation Programmes in the Philippines, Indonesia and Nepal, authors Maruja M. B. Asis and Dovelyn Rannveig Agunias examine the strengths, limitations and areas for improvement of this intervention, based on findings from field research conducted in the three countries.

Pre-departure programmes provide basic information to departing migrant workers to ease their transition into the country of destination and empower them to maximize the benefits of their overseas employment. While the Philippines, Indonesia and Nepal have implemented their government-mandated programmes in different ways, the initiatives are premised on two ideas: (1) that the protection of migrants begins at home, and (2) that information builds a foundation for migrant empowerment and protection.

The authors find that poor implementation compromises the intent of pre-departure orientation seminars to promote the protection of migrant workers, and offer a series of recommendations to improve effectiveness.