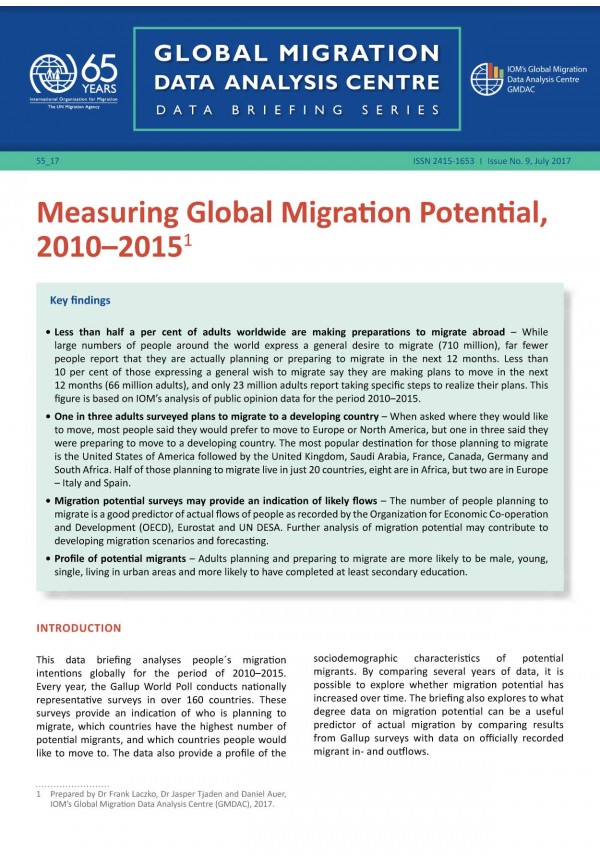 This data briefing analyses people’s migration intentions globally for the period of 2010–2015. Every year, the Gallup World Poll conducts nationally representative surveys in over 160 countries. These surveys provide an indication of who is planning to migrate, which countries have the highest number of potential migrants, and which countries people would like to move to. The data also provide a profile of the sociodemographic characteristics of potential migrants. By comparing several years of data, it is possible to explore whether migration potential has increased over time. The briefing also explores to what degree data on migration potential can be a useful predictor of actual migration by comparing results from Gallup surveys with data on officially recorded migrant in- and outflows.

The findings show that less than half a per cent of adults worldwide are making preparations to migrate abroad. The most popular destination for those planning to migrate is the United States of America followed by the United Kingdom, Saudi Arabia, France, Canada, Germany and South Africa. One in three adults surveyed plans to migrate to a developing country. Half of those planning to migrate live in just 20 countries. The share of the adult population planning to migrate abroad has increased moderately at the global level but more rapidly in certain regions. West Africa, South Asia and North Africa are the regions with the largest migration potential. Adults planning and preparing to migrate are more likely to be male, young, single, living in urban areas and more likely to have completed at least secondary education.

The number of people planning to migrate seems to be a good predictor of actual flows of people as recorded by the Organization for Economic Co-operation and Development, Eurostat and United Nations Department of Economic and Social Affairs. Further analysis of migration potential may contribute to developing migration scenarios and forecasting.