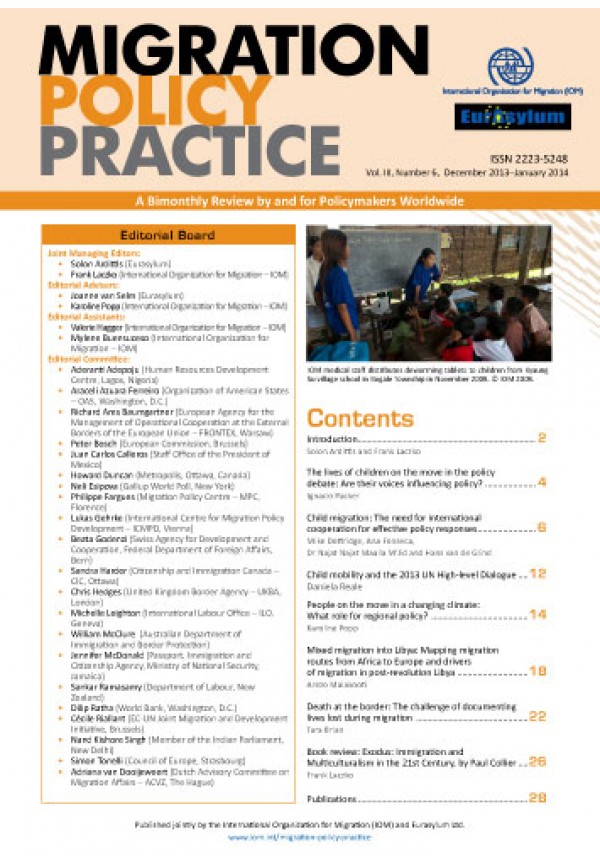 The new issue of Migration Policy Practice covers a range of policy areas, including on child migration, regional policy initiatives in the field of environmental migration, mixed migration flows into Libya, the challenge of counting and documenting lives lost during attempts by migrants to cross borders, and a review of Paul Collier’s book Exodus: Immigration and Multiculturalism in the 21st Century.

The first of three articles on child migration, by Ignacio Packer, Secretary General of Terre des Hommes International Federation, stresses that while the social cost of migration on families and children had been largely ignored in previous UN high-level dialogue (HLD) summits, the declaration adopted by the UN Member States in October 2013 for the first time sets out to “protect the human rights of migrant children, given their vulnerability, particularly unaccompanied migrant children, and to provide for their health, education and psychosocial development, ensuring that the best interests of the child are a primary consideration in policies of integration, return and family reunification”.

The need for international cooperation in the field of child migration is discussed in the second article, by Mike Dottridge (an independent expert on child migration and protection), Ana Fonseca (IOM), Dr Najat Maalla M’Jid (United Nations Special Rapporteur on the sale of children, child prostitution and child pornography) and Hans van de Glind (ILO). The authors identify a number of barriers that need to be overcome in order to establish effective policies for the protection of children on the move.

The third article on child mobility, by Daniela Reale (Save the Children–United Kingdom), discusses the activities implemented by the Inter-Agency Group on Children on the Move in the lead up to and during the HLD 2013.

The remaining articles in this issue of Migration Policy Practice focus on a range of different policy areas.

The next article, by Arezo Malakooti (Altai Consulting), outlines the main findings of a recent research commissioned by the United Nations High Commissioner for Refugees, which aims to understand the routes that migrants take in order to reach Libya, and the drivers of their migration, including the ways in which these might have changed since the revolution.

The sixth article, by Tara Brian (IOM), discusses the challenge of counting and documenting lives lost during attempts by migrants to cross borders. IOM recently calculated that at least 2,400 migrants died in 2013 in regions where such data exist. However, the vast majority of governments do not publish numbers of deaths, and counting the lives lost is largely left to civil society and the media.

The last article, by Frank Laczko (IOM), is a review of Paul Collier’s latest book Exodus: Immigration and Multiculturalism in the 21st Century. This book, which has received considerable media attention in recent months, examines the key determinants of migration decisions and the impact of migration on host societies, the migrants and those “left behind”. In particular, Collier sets out to write a “critique of the prevailing thinking among liberal thinkers” about migration and its benefits.

Migration Policy Practice is a bimonthly journal published jointly by the International Organization for Migration (IOM) and Eurasylum Ltd. It only contributes articles from, and is overseen by, senior officials in governments, EU institutions and international organizations, as well as civil society worldwide, working in the field of migration policy.