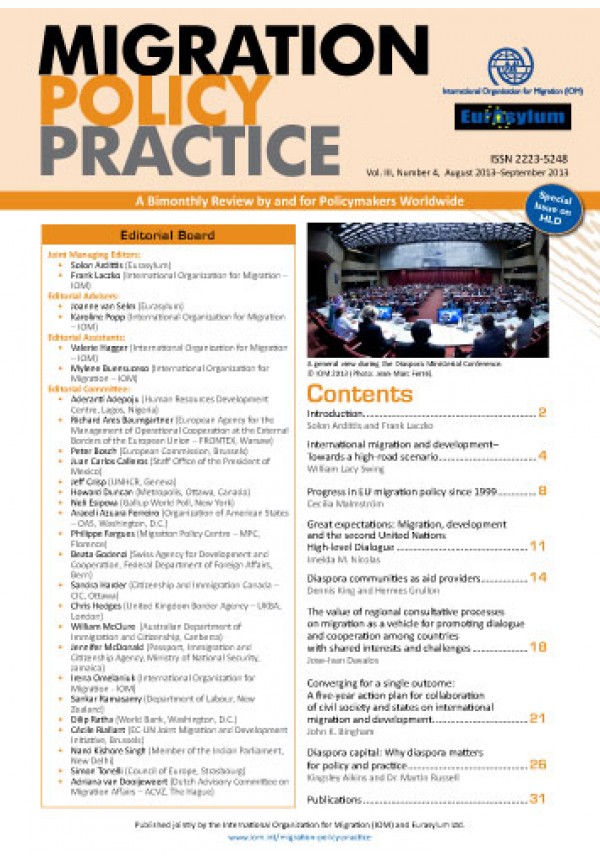 The new issue of Migration Policy Practice focuses on the upcoming UN High-level Dialogue (HLD) on Migration and Development. For only the second time in its history, the UN General Assembly will focus on international migration and its implications for development. As UN Special Representative for Migration, Peter Sutherland, noted in the previous issue of Migration Policy Practice, the summit in New York must generate action and deepen cooperation between States to maximize the benefits of migration for development. The HLD also provides the international community with an opportunity to underline the importance of integrating migration into the emerging post-2015 development framework.

While in many ways the challenges remain the same, migration trends have changed since the first High-level Dialogue on migration and development in 2006. The number of migrants has increased somewhat but remains at around 3.2 per cent of the world’s population. New data from Gallup presented in a previous issue of Migration Policy Practice shows that 8 per cent of adults have moved within their countries in the past five years. Gallup estimates that 381 million adults worldwide can be counted as internal migrants during this period. Remittances received by developing countries have increased significantly, from USD 221 billion in 2006 to USD 401 billion in 2012.

Compared to 2006, there is now a much greater awareness that changes in the environment and climate change in particular are likely to affect the movement of people in the coming years.

There is also a greater recognition of the needs of vulnerable migrants caught up in crisis situations. The recent conflict in Libya which led to the return of hundreds of thousands of migrant workers to their country of origin has added a new dimension to the migration and development debate.

In this issue of MPP authors of different backgrounds outline what they consider to be the key global migration challenges ahead of the 2013 HLD. We hear first from the Director General of the International Organization for Migration, William Lacy Swing, who outlines IOM’s vision for a high-road scenario for migration. In the next article, Cecilia Mamlström, the EU Commissioner for Home Affairs, explains how EU migration policy has changed over the last decade or so, and notes that the 2013 HLD provides an important opportunity to improve the global governance of migration. From the South we have an article by a representative from the Government of the Philippines, Imelda Nicolas, who outlines her vision for the HLD. Another article is by two representatives from the U.S. Department of State, Dennis King and Hermes Grullon, who document the various ways in which Diasporas have become increasingly influential actors on the international humanitarian stage. This is followed by two articles by representatives of civil society, John Bingham, Kingsley Aikins and Martin Russell, who discuss the contribution of Diasporas to development and perspectives from civil society on international migration and development. Finally, an article on regional consultative processes, by Jose-Ivan Davalos, outlines how far regional cooperation in these fora has progressed since the last HLD on migration and development.