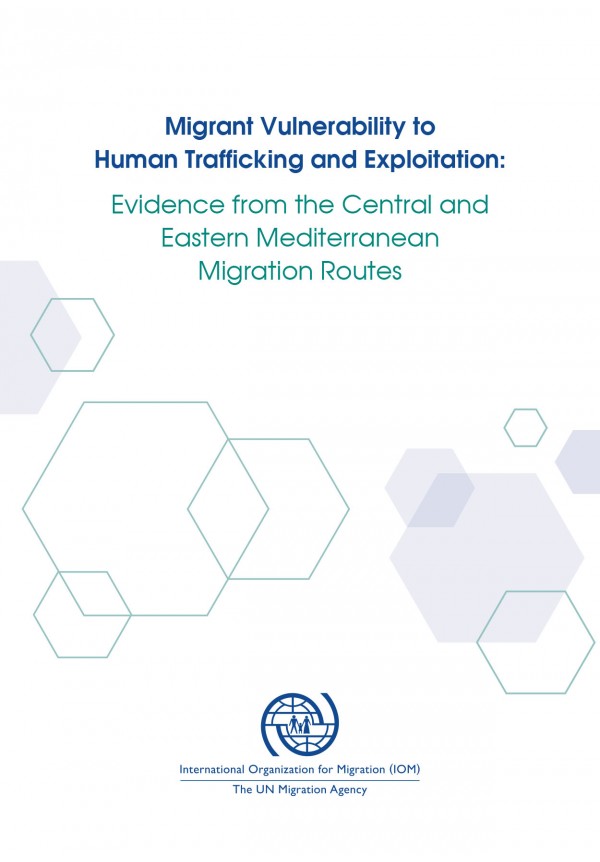 Migrant Vulnerability to Human Trafficking and Exploitation: Evidence from the Central and Eastern Mediterranean Migration Routes

Over the past years, public attention has gradually turned to the experiences of migrants along the precarious Mediterranean routes to Europe. A large number of migrants continue to risk their lives crossing the Mediterranean Sea on the way to Europe, often enduring long and perilous journeys. A growing body of evidence is beginning to highlight the scale and scope of exploitation experienced by migrants along these routes, including human trafficking.

This report examines migrants’ vulnerability to human trafficking and exploitation by exploring risk and protective factors associated with unsafe migration, through the systematic evidence collected by IOM’s Displacement Tracking Matrix (DTM) operations in 2016. It presents the results from the largest existing set of survey data on the vulnerability of migrants to abuse, exploitation and human trafficking on the Mediterranean routes to Europe.

The analysis of the IOM survey data shows that more than one third (37%) of all interviewed migrants had a personal experience that indicated the presence of human trafficking or other exploitative practices along the route. Seventy-three per cent of migrants interviewed along the Central Mediterranean route presented at least one indicator of exploitation, along with 14 per cent of migrants interviewed along the Eastern Mediterranean route. The analysis in this report goes beyond describing the correlates of vulnerability, and it explores whether potential predictors can be associated with vulnerability when statistically controlling for the effects of other variables. Advanced statistical analysis (a set of multilevel logistic regression models) was undertaken to identify factors that predict migrants’ vulnerability during the journey.

Data derive from interviews conducted over a one-year period with more than 16,000 migrants in seven countries, namely, Bulgaria, Greece, Hungary, Italy, Serbia, Slovenia and the former Yugoslav Republic of Macedonia.