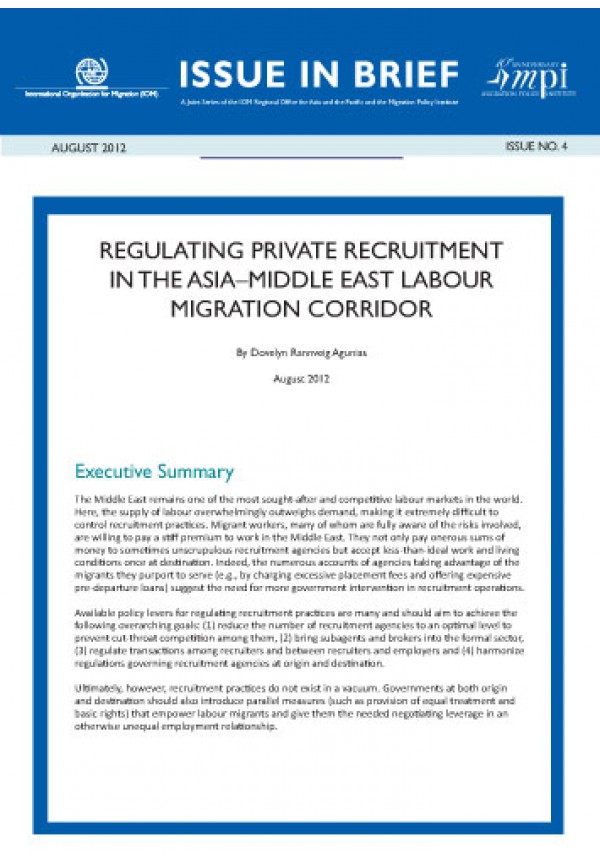 The Middle East represents one of the most sought-after and competitive labour markets in the world, with an estimated 10 million contract workers in the Gulf states alone – 70 per cent of whom are Asian.

The vast majority of this temporary labour movement is brokered by recruitment agencies; and with the supply of labour overwhelmingly outweighing demand, oversight of recruitment practices is extremely difficult. Migrant workers are willing to pay a stiff premium to work in the Middle East, even in the face of onerous placement fees and less-than-ideal work and living conditions once at destination.

The issue brief, the fourth in a series launched by the Migration Policy Institute (MPI) and the International Organization for Migration’s Regional Office for Asia and the Pacific, discusses the policy options that could be implemented to curb abuses by increasing government intervention in recruitment operations.

The issue brief suggests that governments at both origin and destination should become involved by introducing parallel measures (such as provision of equal treatment and basic rights) that empower labour migrants and give them the needed negotiating leverage in an otherwise unequal employment relationship.