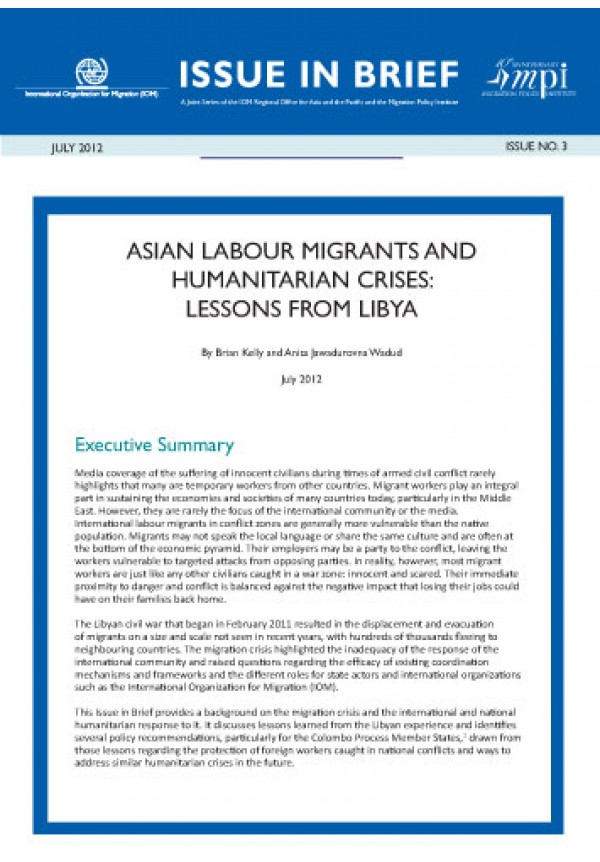 Media coverage of armed civil conflict rarely highlights the fact that temporary migrant workers often are among the innocent civilians who suffer, as occurred during the Libyan civil war. That conflict, which began in February 2011, resulted in the displacement and evacuation of migrants on a size and scale not seen in recent years -- with hundreds of thousands fleeing to neighbouring countries. The migration crisis highlighted the inadequacy of the response of the international community and raised questions regarding the efficacy of existing coordination mechanisms and frameworks. It also brought to the forefront the different roles for state actors and international organizations such as the International Organization for Migration (IOM).

In Asian Labour Migrants and Humanitarian Crises: Lessons from Libya, authors Brian Kelly and Anita Jawadurovna Wadud examine the migration crisis and the international and national humanitarian response to it. The issue brief, the third in a series launched by the Migration Policy Institute (MPI) and IOM’s Regional Office for Asia and the Pacific, discusses lessons learned from the Libyan experience. It also identifies several policy recommendations, particularly for the Colombo Process Member States, drawn from those lessons regarding the protection of foreign workers caught in national conflicts and ways to address similar humanitarian crises in the future.

The brief also examines the ways in which international labour migrants in conflict zones are generally more vulnerable than the native population. These migrants, who play an integral part in sustaining the economies and societies of many countries today (particularly in the Middle East), may not speak the local language or share the same culture and are often at the bottom of the economic pyramid. Their employers may be a party to the conflict, leaving the workers vulnerable to targeted attacks from opposing parties. In reality, however, most migrant workers are just like any other civilians caught in a war zone: innocent and scared. Their immediate proximity to danger and conflict is balanced against the negative impact that losing their jobs could have on their families back home.