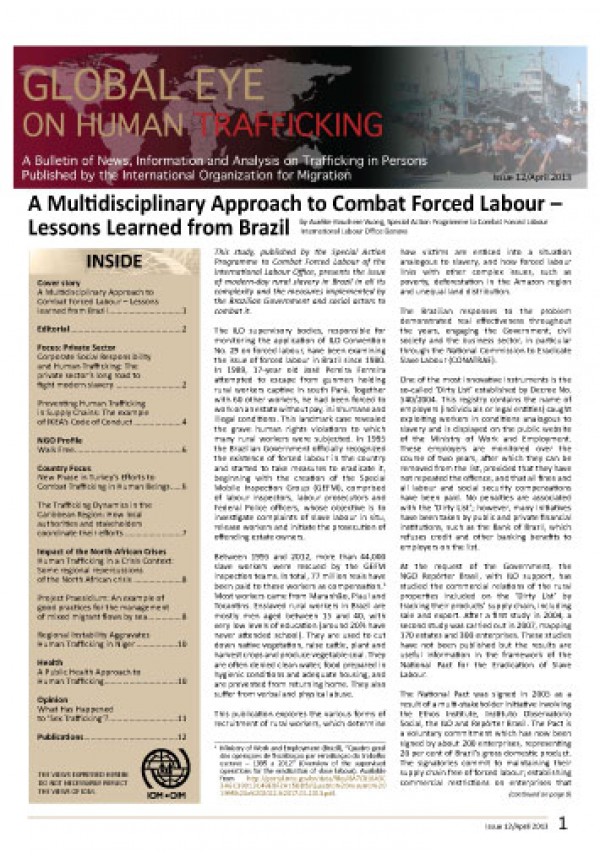 This 12th issue contains a dual focus: First, we explore the role of the private sector in combatting trafficking in persons and other contemporary forms of slavery. To this end, we offer a brief overview of the evolution of the notion of corporate social responsibility: what are its origins; why are private companies today increasingly concerned with it, and; what is being done about trafficking? We’re equally pleased to be able to offer an interview with Saskia Dieleman-Jamin, Compliance Manager at furniture manufacturer IKEA, on its corporate social responsibility approach, and how it is working to address the issue of trafficking in persons.

Second, we offer some reflections on trafficking in persons in conflict situations, and the impact of the Libya crisis on migration patterns and the exacerbated risks being faced by migrants. We encourage you to read, in particular, Simona Moscarelli’s very interesting perspectives from the small Italian island of Lampedusa, and how trafficking trends have changed since the Arab Spring. We also look at the situation of Niger, which borders both Libya and Mali, two countries that have recently experienced conflict.

This issue also looks at the efforts being made in the Americas to combat contemporary forms of slavery. Aurélie Hauchere Vuong from the ILO’s Special Action Programme to Combat Forced Labour has given us our cover story, and provides a summary of the innovative work being done in Brazil to eliminate slave labour, including the creation of the so-called ‘dirty list’. We also hear from IOM’s own Chissey Mueller on the challenges being faced by governments in the Caribbean in addressing trafficking among the islands, as well as some of the successes. Moving away from the Americas, Issue no.12 also looks at Turkey, a key destination country for victims of trafficking in its region, which is now looking more closely at demand-focused initiatives.

If you haven’t yet heard of Walk Free, you will soon. In our NGO profile, CEO Nick Grono writes for the Global Eye to describe this new movement and the four-pronged approach Walk Free is pursuing to make a difference in the fight against modern slavery.

Has the spotlight shifted away from sex trafficking? We conclude with an opinion piece by Dr. Sverre Molland from the Australian National University who argues that the spotlight has not shifted, but broadened in a helpful way. We also offer an article on public health and trafficking by Dr. Jonathan Todres, a law professor at Georgia State University in the United States.