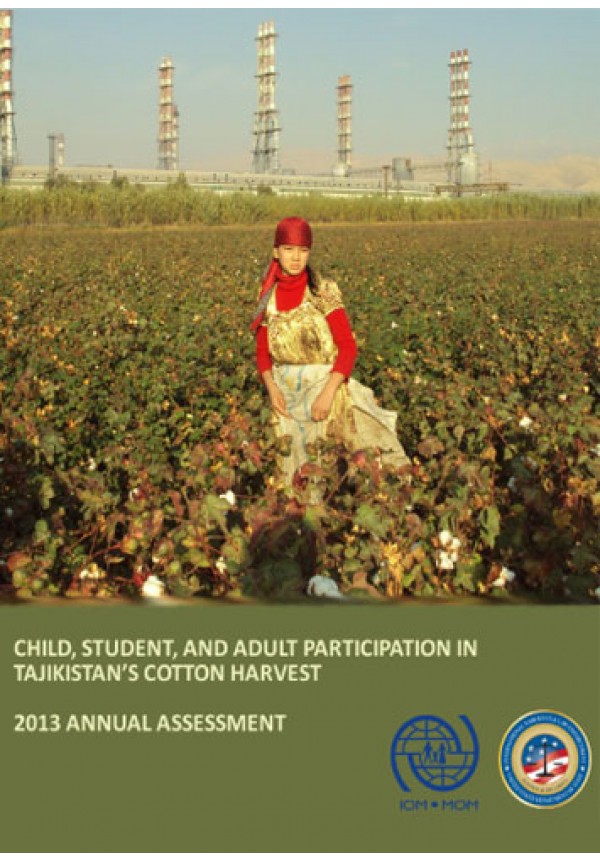 Combating human trafficking remains one of the central priorities of the International Organization for Migration (IOM). Global IOM data on direct assistance show that more than half of all victims of trafficking have been exploited for the purposes of forced labour, and forced labour continues to make up a significant proportion of worldwide human trafficking. In this context, the use of forced child or adult labour in the cotton harvest falls squarely within the scope of IOM’s work to combat human trafficking. IOM has worked extensively over the past few years to assist the Government of Tajikistan with the implementation of its National Action Plan on Combating Human Trafficking in the Republic of Tajikistan for 2011–2013, especially in regard to monitoring and eliminating forced child labour in the country’s cotton harvest. In 2013, moreover, IOM added its efforts to the Government’s Supplementary Action Plan for Combating Human Trafficking in the Republic of Tajikistan for 2013–2014 and the additional measures taken by the Government of Tajikistan to address the growing rights violations, in particular labour rights violations, targeted at adults working in the cotton harvest.

For the past three years, IOM has worked closely with both local non-governmental organization (NGO) partners and government labour inspectors to develop and implement an effective and sustainable campaign to monitor cases of forced labour and other labour violations in the cotton harvest. Over the course of the 2010 and 2011 harvests, IOM developed a successful referral mechanism for observed cases of trafficking in persons, including forced labour, which has been subsequently applied during the 2012 and 2013 harvests. Together with awareness-raising campaigns conducted among district education department figures, teachers and parents, IOM and its partners have seen significant results over the past four harvests, and a gradual shift away from the use of forced child labour. The successes achieved over the past few years would hardly have been possible without the efforts of IOM’s local NGO partners, nor without those of the Tajik government agencies with which the Organization has worked. IOM is especially grateful to the Inter-Ministerial Commission for Combating Trafficking in Persons, the Ministry of Labour, Migration, and Employment of the Population, the Ministry of Education and Science, and the General Prosecutor’s Office for their cooperation throughout the project’s implementation. It goes without saying that this monitoring project would not have been possible without financial support from the Bureau for International Narcotics and Law Enforcement Affairs at the United States Department of State. IOM strongly believes that the successes of the “Monitoring of Children and Students in the Cotton Fields in Tajikistan” project strongly demonstrate the ongoing value of cooperation between government agencies, civil society and international organizations. Together, it is hoped that such cases of human trafficking and labour exploitation can be more effectively eliminated and prevented.