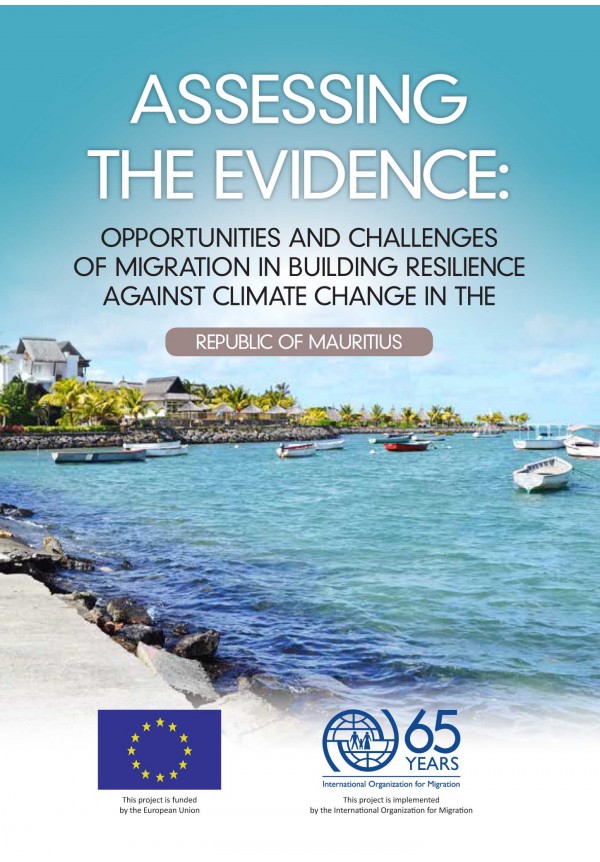 Assessing the Evidence: Opportunities and Challenges of Migration in Building Resilience Against Climate Change in the Republic of Mauritius

In the framework of the European Union–funded Migration, Environment and Climate Change: Evidence for Policy (MECLEP) project, this national assessment focuses on the Republic of Mauritius. The World Risk Report (UNU, 2015) ranks the Republic of Mauritius seventh among the 15 most exposed country to natural hazards, namely sea-level rise, cyclones and floods; and thirteenth among 171 countries for its disaster risk. The country is exposed to environmental stressors, such as rainfall, storm occurrences, humidity, temperature and sea-level rise. These climatic stressors make the country one of the most vulnerable countries to natural hazards.

This report offers insights on the potential climate change risk that people living in Mauritius and Rodrigues are facing and maps their vulnerability, and it is structured in two main sections. The first section maps the nexus between environmental and climate change with migration in the Republic of Mauritius. On the other hand, the second section compiles the existing policy framework, including the policies in the process of being elaborated and the policy options and research priorities, as the closure of the Republic of Mauritius’ policy toolkit.

This report acknowledges that the Government of the Republic of Mauritius is aware of the country’s exposition to extreme events. In fact, the Government initiated studies a decade ago to develop adaptation and mitigation strategies accordingly. Additionally, the report concludes that the Republic of Mauritius’ migration scheme is multifaceted, and highlights the need of an integrated migration framework that includes environmental and climatic stressors. While all citizens might be concerned by natural hazards, this research has a special focus on economically disadvantaged communities that are undeniably the most exposed and vulnerable.

This publication is one of six national assessments to be published under the MECLEP project. The other project countries are the Dominican Republic, Haiti, Kenya, Papua New Guinea and Viet Nam.