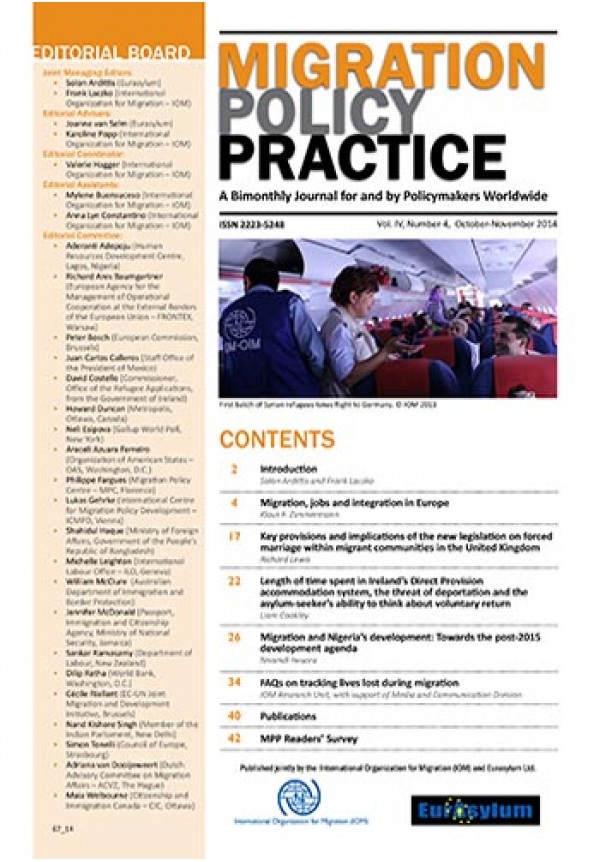 “Labour migration supports economic equality because migrants do not depress wages – nor do they take jobs away. Rather, they foster employment and innovation and make natives more productive.” In his lead article for this issue of Migration Policy Practice, Klaus Zimmermann, Director of Institut zur Zukunft der Arbeit (IZA, Institute for the Study of Labor) and winner of the EIB Prize 2013 of the European Investment Bank, outlines his vision for the future of both labour migration and asylum policy in the European Union (EU).

According to Zimmermann, labour mobility is desirable because, in economic terms, it contributes to an optimal allocation of resources – and thus plays a crucial role in generating higher output and welfare. Such mobility ensures a quick adjustment of labour markets, especially at the regional level. Migrants need to have and maintain different talents and abilities if they are to increase their host economy’s growth potential. Furthermore, all developed economies face a strong and increasing excess demand for skilled labour. This is brought about by technological change, population ageing and, in the case of Europe, by a substantial decline in the future native European workforce. These upcoming needs clearly cannot be satisfied sufficiently by the local labour force or by the educational system in individual countries.

With regard to forced migration, the new European Commission President, Jean-Claude Juncker, stressed that European core values must also be respected when it comes to asylum policy. The first step must be to agree on a transparent quota system guaranteeing a balanced distribution of asylum-seekers across EU member countries. Countries like Germany and Sweden have accepted above-average numbers of asylum applications over the past years, while France and the United Kingdom have been rather reluctant. The definition of a “fair share” must account for the economic strength of each country. Another aspect is becoming increasingly important: many of those who come to Europe for humanitarian reasons are endowed with valuable “human capital.” They have good skills and professional qualifications, and – as Germany’s President Joachim Gauck has put it – they are “highly mobile, flexible, multilingual, motivated and willing to take risks.” However, until recently, they have been effectively barred from seeking employment. In line with what many experts have long demanded, Germany has now eased the restrictions on labour market access for refugees. This gives them a chance to earn their own living, to develop their professional skills further and to achieve social integration. The next logical step is to allow qualified refugees to enter into the regular immigration process. According to Zimmermann, the new EU Commissioner for Migration and Home Affairs, Dimitris Avramopoulos, would be well advised to further develop the EU Blue Card Directive along these lines. After all, his declared goal is to “help Europe address skills shortages and attract the talents it needs.”

Other articles in this issue of Migration Policy Practice focus on: the key provisions and implications of the new legislation on forced marriage within migrant communities in the United Kingdom (by Richard Lewis, from the Institute for European Studies at Vrije Universiteit Brussel); an analysis of how asylum-seekers currently in Ireland’s Direct Provision system engage with the idea of assisted voluntary return to their countries of origin (by Liam Coakley, from the Department of Geography at University College Cork); and a discussion of the issues raised in the consultative process related to migration and development in Nigeria (by Nnamdi Iwuora, from IOM Nigeria).

This issue of Migration Policy Practice also includes frequently asked questions (FAQs) on tracking lives lost during migration. This draws from a report released by IOM earlier this year which provides the first annual global compilation of data on migrant deaths along sea, desert and other migratory routes. The FAQs address, inter alia, key questions concerning the process of tracking migrant deaths, what we know about those who die, and why we should count them.

Migration Policy Practice is a bimonthly journal published jointly by IOM and Eurasylum Ltd. It only contributes articles from, and is overseen by, senior officials in government, EU institutions and international organizations, as well as civil society worldwide, working in the field of migration policy.

As the journal was launched three years ago, the editors would like to invite readers to spare a couple of minutes to participate in a short readers’ satisfaction survey. The purpose of this survey, which can be taken anonymously, is to help us identify our readers’ profiles, the institutions they represent and their primary interests in our journal. The survey responses should contribute, in particular, to adjusting and improving, as appropriate, the journal’s contents, style and reader’s experience. Should you wish to participate in this survey, please click here Migration Policy Practice: Readers' Survey.