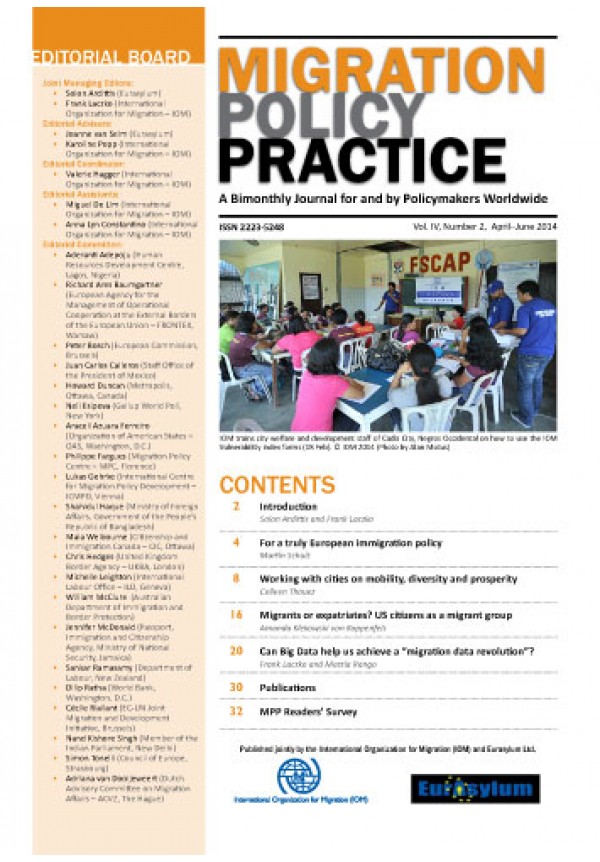 “In Europe, we need to get on urgently with the process of managing migration as best as we can, in accordance with clear principles, so that migration can benefit our societies and our economies.” In his lead article for this issue of MPP, Martin Schulz, former President of the European Parliament (until 18 June 2014), outlines his vision for the future of European immigration policy. According to Schulz, the management of the European Union’s external borders should be a common European responsibility – not only a Maltese, a Greek, an Italian or a Bulgarian issue. National and European efforts should therefore be stepped up and fully coordinated. At the same time, the EU should uphold the right to international protection, including by making full use of the increased EU funds available for resettlement; testing the joint processing of asylum applications within the EU;  focusing more on integration of refugees in their host communities; and boosting the role of the European Asylum Support Office. In addition, with more than 430,000 asylum applications in the EU last year, and some national authorities being increasingly tested to the limit, the EU Temporary Protection Directive of 2001 – which has never been implemented – should become an option where appropriate.

However, according to Schulz, it is also important to fight the causes of migration rather than the migrants themselves. The EU should go further by developing prevention measures and making migration a key issue in all its international relations, particularly with transit countries in North Africa and countries of origin in the South and in the East. This includes fostering circular migration; working on the recognition of qualifications; focusing more on targeted funding for vocational training; and engaging more with diaspora communities.

On the other hand, Schulz maintains that a well-organized, orderly legal immigration should also be supported, with each country accepting its share of migrants. Migrants should be integrated as full members of society, be free from discrimination and be able to contribute to the economy. Europe must get the skills it needs due to its ageing population and shrinking labour force, and European universities should remain magnets for the most gifted foreign students.

The rest of the articles in this issue of MPP focus on a range of regional and global migration policy challenges, including the role of cities and regions in facilitating migrants’ access to rights, benefits and services (by Colleen Thouez, of the United Nations Institute for Training and Research, UNITAR); the integration patterns and needs for assistance of migrants/expatriates from the North, with special reference to US citizens (by Amanda Klekowski von Koppenfel, Director of the MA programme in International Migration at the University of Kent at Brussels); and  the contribution of “Big Data” to improving our understanding of migration trends around the world (by Frank Laczko and Marzia Rango, of the International Organization for Migration, IOM).

Migration Policy Practice is a bi-monthly journal published jointly by the International Organization for Migration and Eurasylum Ltd. It only features articles contributed – and is overseen – by senior officials in government, EU institutions and international organizations, as well as civil society worldwide, working in the field of migration policy.

As the journal approaches its third anniversary the editors would like to invite readers to spare a couple of minutes to participate in a short readers’ satisfaction survey. The purpose of this survey, which can be taken anonymously, is to help us identify our readers’ profiles, the institutions they represent and their primary interests in our journal. The survey’s responses will contribute, in particular, to adjusting and improving, as appropriate, the journal’s contents and style, and thus the reader’s experience. Should you wish to participate in this survey, please click here Migration Policy Practice: Readers’ Survey.