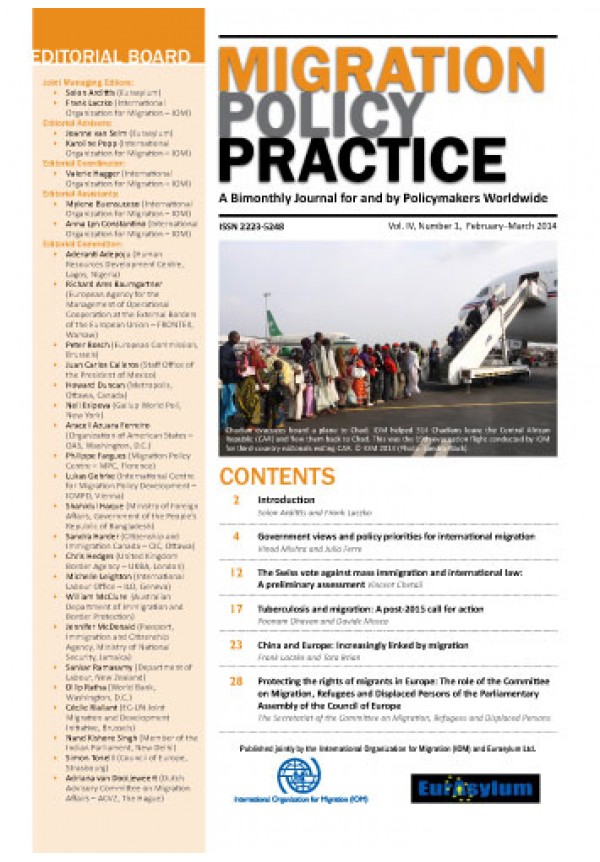 The new issue of Migration Policy Practice focuses on a broad range of national, regional and global migration policy areas.

The first article, by Vinod Mishra from the United Nations Department of Economic and Social Affairs Population Division, reports on the findings of a new global survey that asks governments to indicate their migration policy priorities and to provide information on both their immigration and emigration policies. Contrary to the often negative reports about migration in the media, the survey finds that many more governments around the world have shown “openness to regular immigration in the last two decades”, especially those in developed regions such as Europe. Two-thirds of governments had policies in place in 2011 to promote the integration of migrants. The survey also finds that around half of the countries in the world now permit dual citizenship. Conversely, a quarter of countries around the world have policies to discourage emigration. Moreover, many countries, especially in developing regions, are trying to encourage the return of their citizens and encourage investment in their countries by their diasporas.

The second article in this issue focuses on new policy developments in a small country – Switzerland – which has a high percentage of migrants among its population. In February 2014, the Swiss population adopted an initiative aimed at stopping mass immigration. Vincent Chetail, Director of Geneva’s new Global Migration Centre, discusses the background to the vote and the implications of the results for Switzerland and the European Union. He argues that despite the vote, Switzerland will not find it easy to change its immigration policy given the broad range of treaties that the country has already signed which limit its ability to impose immigration restrictions.

The third article by Poonam Dhavan and Davide Mosca, from the International Organization for Migration (IOM), focuses on migration and health and the Post-2015 Development Agenda. In particular, the article focuses on the links between tuberculosis (TB) and migration. The article argues that it will be difficult to make further progress towards the Millennium Development Goal  targets without expanding health coverage for TB services to migrants who remain a “key affected” and marginalized population in several countries.

The final article outlines the role of the Council of Europe’s Parliamentary Assembly Committee on Migration, Refugees and Displaced Persons. The work of the Committee has not always achieved the attention it deserves. The Committee focuses on supporting policies to protect the rights of migrants, refugees, asylum-seekers and displaced persons. It also promotes dialogue between the members of the Council of Europe to encourage the integration of migrants. In addition, the Committee is especially concerned to find ways to address the needs of internally-displaced persons, especially those who have been displaced for a long period of time.