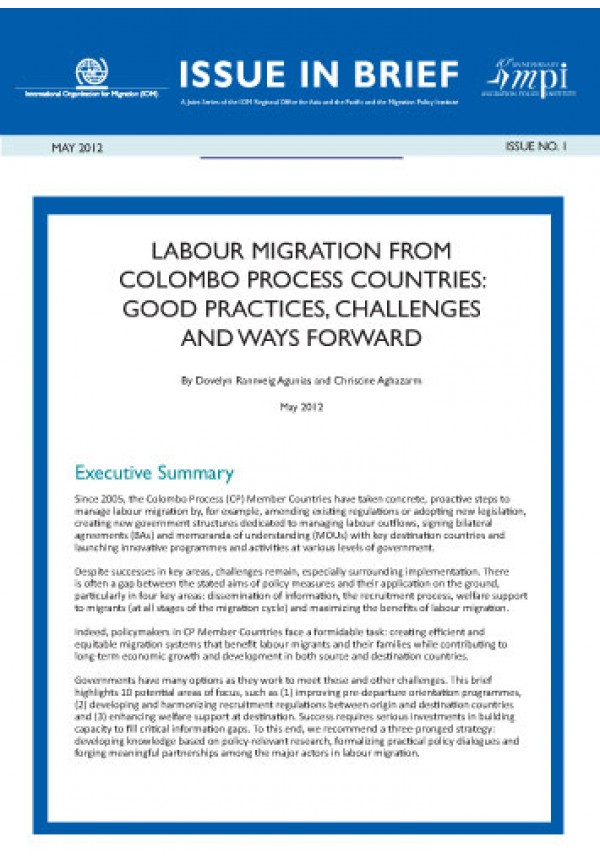 International migration has occurred throughout history and regions of the world. Human mobility to, from and within Asia, however, has certain distinctive features, and Asia represents arguably the most dynamic region, with significant intra- and extra-regional migration and some countries being simultaneously origins of and destinations for migrants.

The Migration Policy Institute (MPI) and the International Organization for Migration (IOM) Regional Office for Asia and the Pacific today launched an issue briefs series focusing in particular on labour migration in the region. The eight-part series also will examine diaspora engagement in Asia and climate-induced migration.

The Philippines sent the largest number (nearly 1.5 million), followed by India (641,000) and Indonesia (576,000). Overall, an estimated 44.7 million migrants from the region are living outside their country of origin.

Since 2005, the Colombo Process countries have taken concrete, proactive steps to manage the migration flows and protect their citizens working abroad, strengthening their legislative and administrative frameworks addressing recruitment regulation and welfare protection, as well as signing new accords with key destination countries. Despite the progress, however, the brief details a number of remaining challenges and highlights 10 possible areas of focus for governments.

“Governments in Colombo Process countries face a formidable task: creating efficient and equitable migration systems that benefit labour migrants and their families while contributing to long-term economic growth and development in countries of origin and destination,” said Andy Bruce, IOM regional director for Asia and the Pacific.

In June, IOM and MPI will publish the second issue brief, this one focusing on migrant health issues in the Asia-Pacific region. Subsequent briefs will be published every month through December, and will be available at IOM Online Bookstore andMigration Policy Institute.